It was a summertime tradition, driving up north to catch a show at 'the Castle' along Lake Charlevoix. I saw some pretty big names there when I was younger, like AC/DC, Cheap Trick and The Scorpions.

Castle Farms is still there, but its rock'n'roll legacy exists only in our memories.

The huge castle along M-66 has a long history, dating back to its founding as a model working dairy farm for Sears and Roebuck president Albert Loeb. Back in the '20s the farm was the largest employer in Charlevoix County with over 200 employees.

The farm eventually closed and the castle fell into disrepair. John VanHaver saved the castle in the '60s by converting it into an art gallery.

In the year of Woodstock, 1969, a man named Art Reibel bought the castle and the surrounding farmland and initially planned to make it an equestrian academy for aspiring horse riders.

But then Art thought if he constructed a stage along the stone wall of the Castle, the entire lawn would open up to hold a pretty sizable crowd. 20,000 to be precise. That's a lot of ticket revenue.

The Castle Farms Music Theater was born, and though it started slowly at first with only a handful of shows each summer, by 1988 it reached its peak by hosting 13 shows.

While pop acts like the Beach Boys and Gordon Lightfoot graced the Castle stage, it was hair metal and hard rock that were its forte.

Def Leppard made more stops at the Castle than any other band (5), REO Speedwagon appeared four times, The Scorpions and Whitesnake three each. Michigan rock legends Alice Cooper and Ted Nugent also made multiple stops at The Castle. 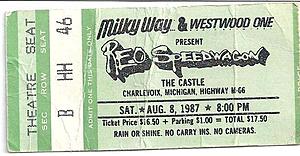 According to the Concert Database, Ted Nugent was the last band to perform there in 1996, in an attempt to jump start the concert venue after three years without a show. It didn't work and the Castle concerts are now just a distant memory.

Castle Farms survives as a beautiful wedding and events venue with guided tours of its gardens still a summer time staple for those visiting the Charlevoix-Petoskey area. The current owners respect its concert past and have a web page on their site devoted to its rock era, and a fan driven Facebook page allows you to share tales of nights at The Castle.

But the days of throngs of crowds packed onto the lawn with their lighters up and the faint hint of marijuana smoke wafting through the air are just an indelible memory on our 'Dazed and Confused' souls.

I have many fond memories of The Castle, not the least of which was the fight I almost got into with a dude who tried to steal my blanket following an AC/DC show in 1988 (why he would want it is beyond me, considering it had beer spilled all over it), and the incredible way Men At Work stole the show from headliners INXS back in 1983.

Here's to summer time in Northern Michigan, rocking out at the Castle, and just standing on the lawn swapping stories while waiting for the parking lot to clear out.